Prosthetics - not replacing a limb, but eradicating stigma through Design

It was fascinating to read this article in Tech Radar about the prosthetics of the future, some of them fitted with microprocessors and sensors, which both look and act futuristic.

But what interested me the most, was to learn that until recently, designers in prosthetics companies never really spoke to consumers. Of course, they did testing - of both prototypes and final products - but they never set out to understand how amputees feel about their condition. How they feel about wearing a device, what other people say about it (or how they look at it) and the impact on their self confidence.

This is a common problem, in the medical space - with companies that manufacture devices, and those that make medicines. They are problem centric, not consumer centric. They see themselves as providing a solution to a problem, rather than doing something for a consumer or end user.

When the prosthetics companies did finally start speaking to consumers, they understood that their job was not just to replace a lost limb. It was to erase the stigma of being lesser than other people. It was to change the dialogue from 'Oh I am so sorry, what happened to you?  to "Wow, what are you wearing?"

And it lifted the product design and aesthetics from dead unimaginative to cool, desirable, even aspirational 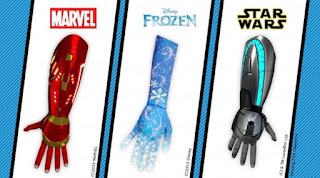 It led to the design of hero-inspired prosthetic (Iron Man, Star Wars) could light up or make noises.

They did not even cost a bomb, like some of the more sophisticated prosthetics. They simply looked cool. Kids loved them. It elevated them from 'lesser' kids to superheros in their own eyes, and in their friends eyes.

Now. some of these companies are working towards 'assisted devices' that do not replace an existing limb but enhance its ability and functionality (so you can lift more weight!)

One day, it might be cooler to have a prosthetic than a real limb. But we would have never, ever gotten there, without Human Centered Design.